China Investment Corp, the nation's $653 billion sovereign wealth fund, has been in the spotlight since it was set up in 2007 to manage part of China's foreign reserves.

It is the world's fourth-largest state wealth fund, according to the Las Vegas-based Sovereign Wealth Fund Institute.

In its early days, CIC was characterized by some ill-advised investments in Western institutions, notably Morgan Stanley, in an attempt to find bargains in the global financial crisis.

China's National Audit Office said in a report in June that the fund's financial and information management is weak, accounting policies for overseas investments are not prudent enough, and it is not strict in enforcing personnel management and accountability measures.

It is clear that CIC's investments in US financial institutions from 2007 to 2009 underperformed. But one recent British report notes that CIC's performance, at least in publicly listed investments for 2009 to 2013 - for up to the first 180 days of trading, post announcement - produced financial returns above average, measured against relative indices.

"We researched all of CIC's investments in listed companies from July 2009 to September 2013," says Henry Tillman, chairman and CEO of Grisons Peak, a merchant banking firm in London that specializes in analyzing investment flows to and from China. The analysis excluded Bumi Resources, which CIC will not convert into equity until next month.

"We chose public companies versus private companies in that the data was publicly available and thus financial performance was easier to track," Tillman says.

All 14 CIC investments that Tillman and his team used as case studies include CIC's $1.5 billion purchase of a 17 percent stake in Teck Resources Ltd of Canada in 2009, its $1.58 billion investment in power company AES in the US in 2009 and its $2 billion investment last year in Uralkali of Russia, the world's largest potash producer.

Of the 14 investments, 11 outperformed the index on day one, post announcement, the report finds.

And nine out of the 14 investments outperformed the relative index over 180 days, post announcement.

"The financial returns are partially driven by the fact that five of these investments were made at a discount to market," the report says.

In addition, four of these were investments before initial public offerings like participation in the purchase of 6.3 percent of the Moscow Exchange in 2012 and the 2010 investment in BTG Pactual, a Brazilian multinational investment banking firm.

The report also points out CIC's strategic considerations and partnerships as part of the overseas investments.

"At least three of these investments produced asset sales to other Chinese companies," Tillman says. The three were AES; the food, energy and mining conglomerate Noble Group; and KazMunaiGas, the state-owned oil and gas company of Kazakhstan.

CIC bought a 15 percent stake in Singapore-listed Noble Group for $858 million in 2009. Then this year, COFCO Corp, the state-owned company that is China's largest food processing, manufacturer and trader, paid $1.5 billion to buy a 51 percent stake in Noble Group's agribusiness.

In several other cases, investments led to securing either future energy supplies and/or potash to China, Tillman says.

In recent years, CIC has been known for investment in companies covering sectors such as oil and gas, renewable energy and grain.

The report finds that CIC was forced to pay a 7 percent premium to market to secure a stake in Eutelsat, Europe's largest satellite operator, for access to its technology. This premium has led to subindex returns throughout the first 180 days, post announcement.

CIC also secured partnerships with two of the BRICS' most important banks: BTG Pactual and VTB, which have already led to additional proprietary deal flows. VTB is one of the leading universal banks in Russia.

While there is only one case study from 2013 in the Grisons Peak report, the fund says in its annual report published on Aug 8 that CIC's net profits grew 11.8 percent to reach $86.9 billion last year. Returns on its overseas investments in 2013 fell to 9.3 percent from 10.6 percent in 2012.

"We can claim with certainty that our performance is at the upper-middle level among our peers," says Li Fangyu, managing director of CIC's department of public relations.

CIC last year increased its holding of equities while cutting exposure to government bonds. It also reduced its exposure to absolute return vehicles, such as hedge funds, risk parity and multi-asset funds, and to long-term investments.

In a sign of a more aggressive investment strategy, it raised its investment in public equity to 40.4 percent of its total overseas investment, up from 32 percent in 2012. Meanwhile, the allocation to fixed-income securities such as treasury bonds and corporate bonds was lowered to 17 percent from 19.1 percent in 2012.

CIC last year reduced its holdings in, or withdrew from, more than 10 investments, which boosted this year's financial performance.

In its open market investment, US equity accounted for 46.1 percent, the largest exposure, though it was lower than the 49.2 percent share in 2012. CIC boosted its exposure to non-US advanced economies' equities by 9 percentage points to 36.8 percent.

CIC also disclosed that it has earned money from its investment in Blackstone Group LP, the investment and advisory firm.

The high-profile investment has been under close scrutiny as CIC lost heavily soon after the investment in 2007, when Blackstone's share price plunged amid the global financial crisis.

But CIC says it earned a handsome return through a dividend and share price surge. It even recorded more profits from collaboration with Blackstone in other investments.

However, CIC is not very optimistic about this year's outlook.

The previous round of global stock market rallies has made it more difficult for CIC to buy in at a low price. And it has become harder to find premier investment targets as loose liquidity has meant fiercer competition, Li says.

Rising protectionism in many countries barred CIC from many promising investments. Liu cites Canada's tighter scrutiny over foreign access to its oil sands industry as an example.

CIC has not announced any deals of note in the past year as it underwent a leadership reshuffle. Its chairman, Ding Xuedong, was appointed in July last year. 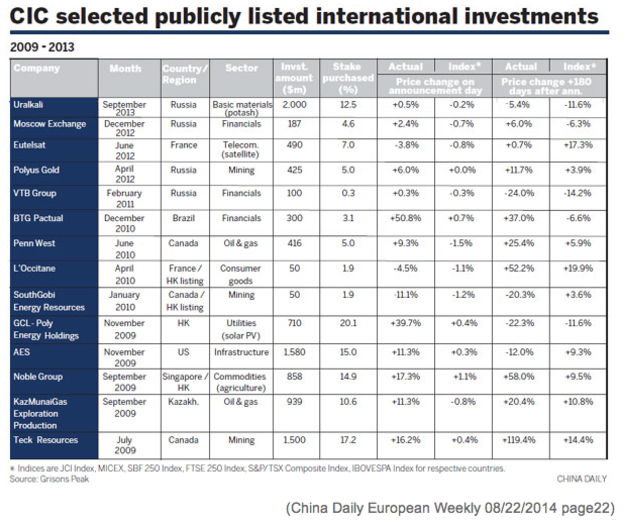