This study analyses Chinese outbound investment into the US since 2004, the year when the Chinese made their initial major acquisition of a US owned organisation. The empirical data is from 2004-2011 inclusive, and extends across M&A/equity investments as well as major Bank Loans and major Trade Agreements. The data has been assembled solely from public sources, and in many cases, from the Grisons Peak China Outbound database.

In this study, we posit that there are three distinctive stages of Chinese outbound investments into the US:

In 2005, China attempted two additional major US acquisitions. Haier, China’s largest appliance group, attempted the acquisition of Maytag for USD 1.28 billion, and CNOOC made an unsolicited offer to acquire Unocal for USD 18.5 billion. Neither transaction was successful. Haier was outbid by Whirlpool, which successfully offered USD 1.36 billion for Maytag. The US Government blocked CNOOC’s bid for Unocal, which it subsequently withdrew. Also in 2005 there were six smaller acquisitions completed, including two advisory firms and a small automotive parts company totalling under USD 100 million aggregate amount (representing a 54% decline in volume from 2004).

2006 saw 14 successful transactions, all in M&A/equity. These were completed across industries and led by industrial products. None of these were over USD 75 million in value. Of the eight, where transaction values were published, the average transaction size was just about USD 30 million.

In 2007 M&A/equity volumes increased to 23 completed transactions, a 64% increase. The aggregate amount soared to over USD 9 billion, with the two largest transactions representing USD 8 billion (89% of the total aggregate amount). There were four transactions in financial services (including the three largest this year), and four in technology. The rest were scattered across other industries.

M&A/equity volumes increased by 35% in 2008, while aggregate M&A/equity amount declined by 53%. Again this year, the two largest M&A/equity deals were in financial services. Together, they represented 73% of the aggregate amount invested. Additionally in 2008, there was the first major Trade Agreement, focusing on soybean purchases. The aggregate amount remained relatively flat. 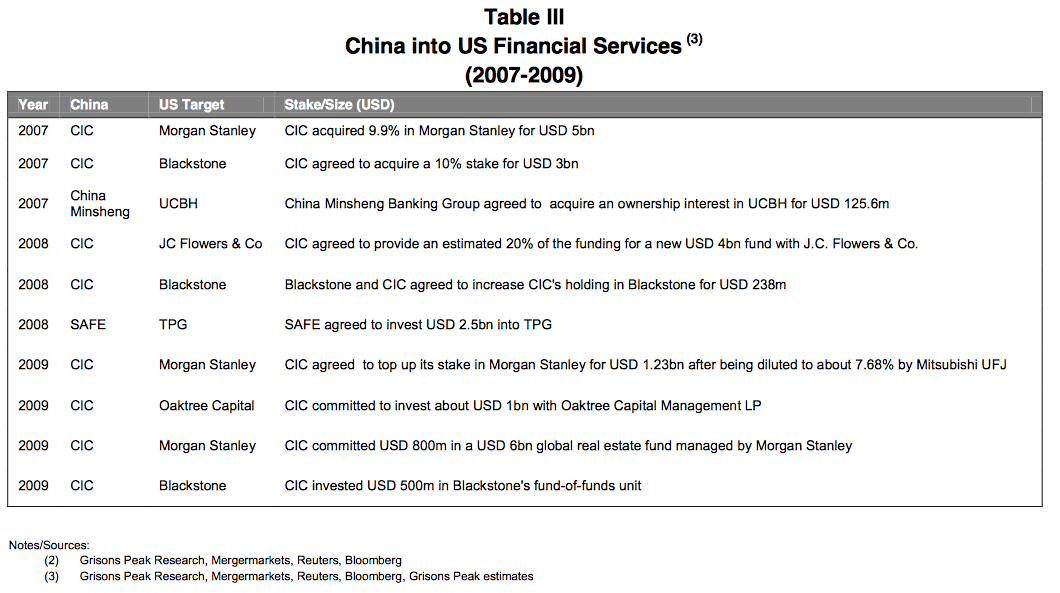 As shown above, the 2007-2009 period was dominated by Chinese outbound investments into US financial services. At the time this was not really a surprise. Only ten years before, most of the major Chinese banks had far from healthy balance sheets, with weak domestic product skills and inadequate systems. As US institutions were considered to be world leaders, the Chinese believed that the US financial system could provide many of these needs. In 2007 they therefore made two major direct investments of an aggregate amount of USD 8 billion in Morgan Stanley and Blackstone. Shifting their attention to private equity funds, in 2008 the Chinese continued their focus on financial services in the US. They made major investments into funds managed by Blackstone, TPG and J.C. Flowers. Before Bear Stearns failed, there were also discussions about whether CITIC would make an investment of USD 1 billion in the company.

Q3 2008 saw the beginning of the financial crisis, during which the value of many of these investments was adversely affected. Initially, CIC (via its partnership with J.C. Flowers) was planning to bid for Lehman Brothers before its failure in September 2008. In October 2008, Mitsubishi UFJ, as Japan’s largest bank and one of the world’s largest financial services organisations, acquired a 21% stake in Morgan Stanley. This deal was backed by the US Government. At that time, it was widely rumoured that CIC wanted to increase its stake in Morgan Stanley to 49%. This deal was not backed by the US government. Subsequently, J.C. Flowers invested in other financial services that subsequently failed, negatively affecting the returns of Chinese investment in their fund(s). TPG led a group of investors to invest USD 7 billion in Washington Mutual before its failure.

Since 2009, there have been no major investments by Chinese investors in US financial services (except for a container leasing transaction). The major listed Chinese banks have proven to be excellent investments for those acquiring shares at their respective IPO prices.

Formal government approval is required for all Chinese inbound and outbound transactions. The key government agencies in this process are the Ministry of Commerce (MOFCOM), the National Democratic Reform Commission (NDRC), and other relevant industry/sector regulators, including China Banking and Regulatory Commission (CBRC) and China Securities Regulatory Commission (CSRC). As a general principle, all foreign related M&A deals are subject to approval by NDRC. In 2011, China also added a National Security Review approval process.(4)

In the early 2000’s, after years of Chinese inbound investments led mostly by US corporates, major US private equity firms commenced their China inbound efforts. In October 2005, Carlyle agreed to acquire 85% of Xugong Construction, the market leader in China’s machinery sector, for USD 375 million. The proposed transaction represented the largest acquisition by a foreign investor for a controlling stake in a leading Chinese SOE. After nearly three years of debates with various Chinese authorities, as well as numerous efforts to restructure the proposed deal, Carlyle dropped its efforts during mid 2008.(5)

In 2008, Coca Cola made a USD 2.4 billion bid for Huiyan, a China based juice maker, which was rejected in 2009 by MOFCOM on the grounds of antitrust. At the time of its decision, MOFCOM was keen to point out that it had unconditionally cleared 23 of its 24 transactions, and the remaining one (InBev/Anheuser-Busch) was approved subject to conditions.(6)

The Chinese Government was not alone. Since 2007, there have been a number of inbound transactions blocked by the US Government. For example, Hauwei, a Chinese champion in telecommunications, has seen at least two of its proposed US acquisitions rejected. In 2007, it proposed acquiring a 16.5% stake in 3com Corp for USD 363 million.(7) This transaction was rejected by CFIUS. Huawei then acquired certain assets of 3 Leaf Systems for approximately USD 2 million, though this transaction was rejected and ultimately unwound.(8) In 2009 and 2010 there were two other proposed transactions which were withdrawn on grounds of national security before CFIUS or the President reviewed them.(9)

In light of the decreased financial returns as a result of the crisis, as well as blocked M&A/equity transactions, there have been significant shifts from the pre-crisis patterns of Chinese investments into the US.

In 2010, M&A/equity volumes leapt by 75% but the aggregate amount fell by 25%. There were only three transactions over USD 1 billion – two in Energy and one in Automotive. Over 50% of the M&A/equity transactions (where values were disclosed) were under USD 50 million. However, due to two Loan Agreements and six Trade Agreements, overall volumes still increased by 82% while the aggregate amount for 2010 increased by 46%. Of the major Trade Agreements, two involved aircraft purchases and two were in Technology. The largest was another China Soybean Trade Agreement.

2011 saw a continuation of post-crisis trends. M&A/equity volumes were flat, while the aggregate amount (where data was available) fell by 15%. There were only two transactions over USD 1 billion and investment appetite fell as the year progressed. Excluding the Huawei/Symantec squeeze-out transaction, China invested less than USD 200 million in M&A/equity in the US during Q4 2011 (or less than 1% of its global outbound M&A/equity aggregate amount). Volumes across all investment types remained flat, while the aggregate amount increased by 326%, as Trade Agreements saw a huge boost during 2011. These were led by nearly USD 30 billion in aircraft purchases, USD 18 billion in energy agreements and a USD 6.7 billion soybean purchase. While many of these had been pre-agreed, they were announced in a single package during President Hu Jintao’s visit to the US in January 2011. Separately in October 2011, China signed a USD 4.5 billion agreement with the State of Missouri(10), which included USD 1.2 billion in agricultural products and 3.2 billion to other manufacturers.(11)

As is clear from the above tables, China made a strategic post-crisis financial shift, from M&A/equity into major Trade Agreements. Post 2009, such Agreements represent approximately 61% of total Chinese outbound investment into the US since 2004. Outside the aircraft and energy deals, agriculture has become a key link between the two countries in terms of China outbound purchases/investments. By 2010, China imported USD 18.6 billion agricultural products from the US, representing 13% of total US agricultural exports.(12) In 2011, China surpassed Canada as the largest importer of US agricultural goods.(13)

It was therefore not surprising to see two of three stops in Vice-President Xi Jinping's most recent visit to the US focused on securing future agricultural supplies (Iowa), as well as shipping to/from China/Los Angeles. In Iowa, during Vice President Xi’s visit, Trade Agreements totalling 12 million metric tonnes of soybeans (valued at USD 9.68 billion) were signed. In addition to soybeans, Iowa is also the largest exporter of pork to China.(20)

It is reasonably clear from this analysis that there have been significant shifts in Chinese investment patterns into the US over the past eight years. Its early success with the IBM PC deal was then offset by major lost or blocked transactions by major Chinese SOEs. The next phase was represented by large investments in US financial services. In hindsight, these transactions were not well timed as most were made before the start of the financial crisis and at the cyclical peak of US financial services stocks.

Post-crisis M&A/equity volumes continue to increase across industries but with much smaller transaction sizes. To date in 2012, there have been approximately 25 announced M&A/equity transactions involving US based targets. Only two of these, Sinopec’s acquisition of Devon Energy (USD 2.5 billion) and Beijing DQY Agricultural Technology’s acquisition of Smithfield Foods (USD 1.8 billion) were over USD 1 billion. Only one of the other M&A/equity transactions where amounts were disclosed was over USD 50 million, while the majority were under USD 10 million. Seemingly closed is the window when it appeared that major Chinese SOEs would be permitted to acquire major US organisations or when major US corporates would be permitted to acquire major Chinese brands. Also the time has passed of Chinese financial groups requiring US financial services expertise. The world's two largest economies appear locked in this post crisis trend. This trend, which we do not expect to change, is likely to be related to a number of causes, none of which appear to be easily solvable during this or the next Administration in either country. However, such causes lie outside the scope of this paper.

Trade Agreements, led by Energy and Agriculture, have become much more important. China has the challenge of producing 20% of the world’s grain for 20% of the global population, but with only 6.6% of the world’s water resources and 9% of the world’s arable land.(22) It is reasonable to anticipate further major agricultural agreements from US States such as Iowa and California. To date, agriculture has been centred on soybeans. However, significant increases in corn and pork agreements can also be expected due to China’s need to continue to diversify its energy and agricultural sources.