Banks have ramped up lending to Chinese companies for projects abroad

HONG KONG—As Beijing grapples with a sluggish economy, a heavy debt burden and sagging financial markets at home, it is pushing through a new wave of credit-fueled overseas investment to stir growth. 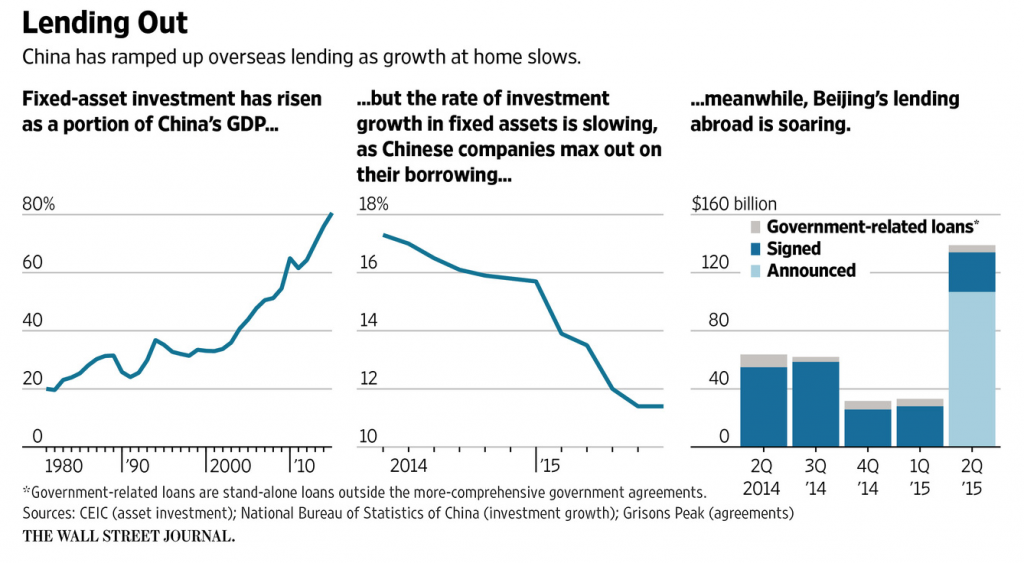 For years, Chinese banks lent heavily to the country’s big state-owned companies so they could invest in new infrastructure, fueling rapid growth. But that strategy has maxed out. Many industries are now suffering from overcapacity.

In the past year, Chinese banks have ramped up lending to Chinese companies to head abroad and take part in infrastructure joint ventures. They have also lent more to a host of overseas borrowers, from shipping companies in Greece to renewable-energy projects in Malaysia, to fund the construction of dams, power plants and railroads.

The low-cost capital has usually come with a key condition: The projects must buy Chinese goods and employ Chinese workers.

The push to lend abroad can come with geopolitical benefits, helping China cement ties with allies such as Venezuela and countries in Central Asia. But it is also deepening China’s dependence on debt to fuel its economy.

In an official statement in late December last year, Beijing said it would ramp up financing for Chinese companies that are “going global,” noting it would help “make more use of excess production capacity.”

“In essence, what they are doing is lending money to build infrastructure, to increase GDP growth,” said Henry Tillman, chairman and chief executive officer of Grisons Peak LLP, a London-based advisory and investment-research firm.

The 20-year loan, at a fixed interest rate of 2%, came a year after Montenegro had selected state-owned China Communications Construction Co. and its subsidiary, China Road & Bridge Corp., as the top bidders on the project, according to a government news release at the time.

The loans’ terms stipulated that just 30% of the work would have to be subcontracted to domestic companies. Of the roughly 4,000 workers that the project is expected to employ at its peak, just 354 Montenegro workers have been hired thus far, according to a local media report this past week.

Earlier this year, Indonesian state-run coal producer PT Tambang Batubara Bukit Asamtook a 45% stake in a newly created joint venture with China Huadian Corp. to build coal-fired power plants. About 75% of the project will be funded by a $1.2 billion loan from China’s Export-Import Bank.

China has been lending to foreign borrowers for more than a decade, but this year’s push comes as its economy has been growing at its slowest rate since the financial crisis. Several rounds of stimulus, including interest-rate cuts, have failed to boost fixed-asset investment, in part because companies and local governments have reached their borrowing limits.

Economists estimate China now needs more than three times the amount of debt for every incremental yuan of GDP growth it needed a decade ago. China has increased its debt load from $7 trillion in 2007 to $28 trillion as of the middle of last year, according to the McKinsey Global Institute.

Government agreements, such as for assistance to build infrastructure or trade financing, between the world’s second-largest economy and other countries, including India, Pakistan and Russia, increased by four times in the second quarter of this year, totaling $134 billion, according to data from Grisons Peak. Loans backed by the government, usually related to the agreements, totaled $19.6 billion in the quarter, with most of them involving projects directly linked to Chinese companies.

Overseas borrowers can often get loans from policy banks at lower rates than they would get elsewhere in international debt markets. Some of those getting loans would normally find it impossible to get funding in foreign markets, analysts say.

With China’s overseas lending increasing, the number of people working on contracted projects has also grown. In the first six months of the year, 264,000 Chinese workers traveled abroad, up by 9,000 from a year earlier, according to official data from the Ministry of Commerce, bringing the number of overseas workers to more than one million.

Still, China’s overseas lending has come with its share of snags. State-owned companies building dams in Malaysia have frequently been hit by local protests against displacement and environmental concerns, disrupting construction work. In Indonesia, Chinese state-owned companies that have built a series of power plants have come under fire over the quality of their construction.

China Three Gorges Dam Corp., the state-owned company behind the world’s largest dam and one of the world’s largest hydroelectricity companies, is typical of big Chinese companies getting support to expand abroad as its home markets slow. Last year, the company said it received government subsidies for international investments that are 10 times the level it received in 2012. Earlier this month, it issued its first offshore public bond, totaling $1.5 billion, to fund overseas investments and projects.

The company plans to invest 8.5 billion yuan outside China between this year and 2017, more than double what it spent overseas in the past three years. Meanwhile, its domestic capital spending is set to shrink by 14%.

But operating revenue from the company’s overseas investments has fallen over the past three years. In 2014, it effectively wrote off almost $100 million of investments in South Sudan and Pakistan. The company didn’t respond to requests for comment.

Analysts warn that these undertakings could eventually weigh on China, if borrowers are unable to repay the loans. The Chinese government “will assume greater credit risk as it gradually diversifies some of its sizable foreign-reserve holdings into emerging-market foreign direct and portfolio investments,” analysts at Moody’s Investors Service noted in a recent report.